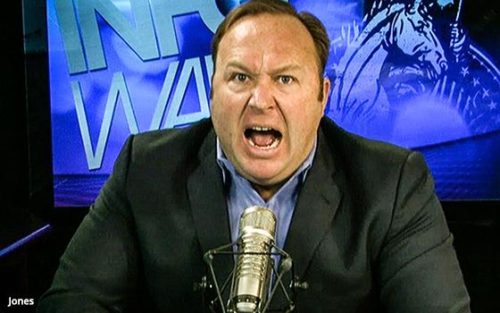 InfoWars’ Alex Jones made incredibly disturbing comments about MSNBC broadcaster Rachel Maddow during a piece on the Mueller report. Maddow covered the story repeatedly – as did the rest of mainstream media.

During the segment, Jones called reporters “scum” and “traitors” and specifically focused on Maddow, saying he would gladly execute them for covering the special counsel’s investigation into whether or not the Trump campaign colluded with Russia to win the 2016 election.

“If you’re found guilty of treason, and they want me to kick the switch to open that trapdoor and drop your neck down and snap that son of a bitch, I swear to God I’ll pull those levers all day,” he said as footage of Maddow appeared on screen behind him.

Attorney General William Barr released a brief report over the weekend that said Mueller concluded there was no collusion with the Russian government, but stopped short of exonerating the President of charges he attempted to obstruct justice. President Trump has repeatedly claimed the report had also found him innocent of those allegations.

Instead, Barr said that Mueller “did not draw a conclusion one way or the other as to whether the examined conduct constituted obstruction.” Barr and Deputy Attorney General had decided that the evidence was “not sufficient to establish that the President had committed an obstruction-of-justice offense.”

Jones has been banned from most social media platforms for his nonstop conspiracy theories and harmful rhetoric. He is currently being sued by family members of the Sandy Hook mass school shooting for repeatedly claiming the tragedy was a hoax and the victims were actors.