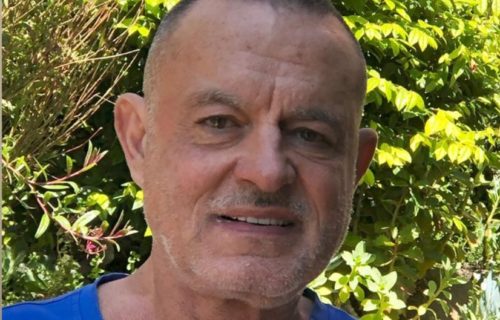 Benjamin Waters, 58, has been accused multiple times of shouting anti-gay slurs at neighbors and even attacking them.

He is now facing charges of battery, vandalism under $400, multiple counts of violating a restraining order, illegally possessing a firearm, and hate crimes enhancements.

He has pled not guilty.

Even though he has been at it for years, the case that could send him to prison involves an alleged attack on Michael Westerfield, who is 62 and gay.

Westerfield has lived across the street from Waters for five years and filed ten police reports against him.

Last September, Westerfield said that Waters shouted at him and his husband: “Fucking faggots! Hope you all die of AIDS! If you want to do something about this, I’ll beat your ass and your dog’s ass too.”

That same month, Westerfield told Waters that he planned to get a restraining order against him.

Westerfield said that Waters punched him in the face and kicked him. He then “started to fall and [Waters] pushed me down harder and then he picked up my cell phone and threw it in the street.”

Westerfield was treated at a hospital for a busted lip, bruises, and abrasions, but police said that they wouldn’t write up charges because there were no witnesses and therefore “nothing they could do.”

But he eventually got an assistant district attorney to file charges against Waters, and Westerfield was able to get a five-year restraining order.

Waters has violated that restraining order at least four times and threatened Westerfield with a weapon. He was arrested twice for violating the order.

Kelley Keery, a 50-year-old lesbian, said that she used to live in the same building as Waters.

“It was four and a half years of harassment,” she said. “He would call me a fat fucking dyke and say ‘I am going to fucking kill you.’ He also threatened my dog.”

“He would park his car so close to mine that I could never get out,” she added. “He would also block access to my apartment. He would stand behind the door with his dog.”

She said that she had to get police to escort her home multiple times and she eventually got a restraining order against Waters. He violated the order and was arrested at least “a dozen times,” according to Keery.

She also sued Waters’s mother, who owned the building they both lived in, for failing to provide a safe living environment. She won an undisclosed payout in mediation.

Jeffery Mead, 53, has also been harassed by Waters for years.

“For years, when I would walk my dog, he would call me AIDS faggot, drive his truck on the sidewalk to intimidate me, and he would threaten me,” Mead told the Bay Area Reporter.

“This was constant. I called the police many times and so often they never did anything.”

In 2006, Mead said that Waters came up to him with a knife and made stabbing motions toward him.

But police, according to Mead, were reluctant to arrest Waters, saying, “He’s just drunk.”

Even though there were five witnesses to the incident, several district attorneys at first refused to pursue the case. Eventually Waters entered a guilty plea and did not serve any jail time.