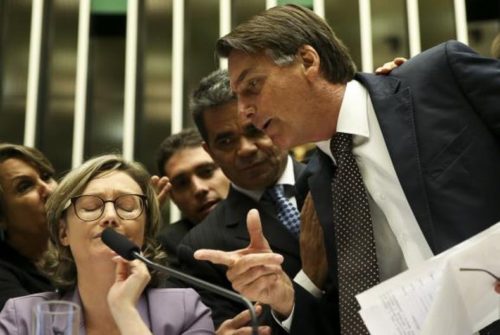 Brazil President Jair Bolsonaro decried gay male tourism to his country, saying that he would prefer men who visit Brazil to have sex with women.

“If you want to come here and have sex with a woman, go for your life,” Bolsonaro said at a breakfast with journalists.

“But we can’t let this place become known as a gay tourism paradise. Brazil can’t be a country of the gay world, of gay tourism.”

“We have families,” he added.

“This is not a head of state – this is a national disgrace,” said member of congress and LGBTQ activist David Miranda, who added that the statement encourages the exploitation of Brazilian women.

“He is staining the image of our country in every imaginable way,” he said.

LGBTQ activist and lawyer Renan Quinalha told The Guardian that the comments “give a green light to already alarming levels of violence against the LGBT community.”

“All this demonstrates is… something that he has made consistently clear over nearly 30 years of public life: that he is a homophobe,” Quinalha said.

Bolsonaro is a staunch opponent of LGBTQ rights and has made a number of hateful statements, including that he wouldn’t love his son if he came out as gay.

He also promised to ban references to LGBTQ people at school, saying they’re a threat to “Christian values.”