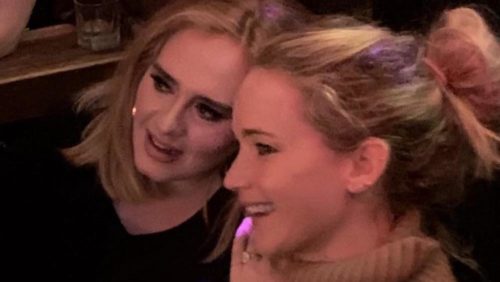 Fans were excited considering Adele’s outspoken support for LGBTQ rights. In 2011, she performed a free concert for the charity Pride London. She also dedicated a June 2016 performance to victims of the Pulse nightclub shooting and in April 2018 she officiated the same-sex marriage of comedian Alan Carr to Paul Drayton.

Here is a video of Adele being questioned by drag queen hostess Brita Filter:

Filter asks, “I need to know: Are you single or taken?”

Adele responds, “I’m married.” She has been married to Simon Konecki since 2016.

Afterwards, Filter asks, “You’re married, but are you still ready to mingle and have a great time with the gays tonight?”

“F*ck*ng obviously,” Adele responds, to the cheers of the audience.

Related: This gay bar instructed photographers not to shoot pics of skinny “messy boys” or women

Later on, Filter asked Adele what she does for work these days, and Adele responded that she’s actually a stay-at-home mom. Her son, Angelo, was born on October, 19 2012, making him six-years-old. Adele released her third studio album, 25, in 2015, but hasn’t released one since.

And here’s footage of Adele playing a “Musical Chairs” style drinking game while dancing around a table to Kylie Minogue’s “Can’t Get You Out of My Head”:

Adele loses, but seems to resist drinking the penalty shot. Disappointed by her loss, Lawrence storms the stage and topples Adele over while Filter says, “This isn’t the Hunger Games!”

In the background, a patron offers to drink Adele’s shot, repeating “I volunteer!”, an iconic line from Lawrence’s 2012 Hunger Games film.

Lawrence has also shown support for the LGBTQ community. Following the election of Donald Trump, she encouraged marginalized people to fight for their rights, stating, “Let this be the fire you didn’t have before. If you are an immigrant, if you are a person of color, if you are LGBTQ+, if you are a woman – don’t be afraid, be loud!”