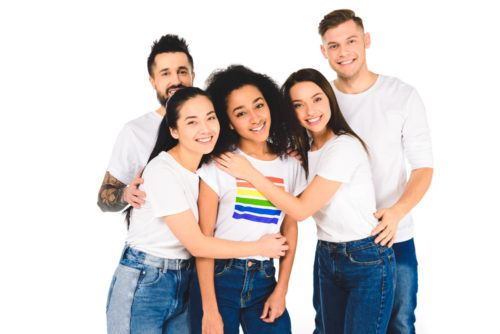 The number of Americans who believe that gay and lesbian people face “a lot” of discrimination is rapidly plummeting, according to a new report.

Data website FiveThirtyEightanalyzed five years of opinion polling from the nonpartisan Public Religion Research Institute (PRRI) conducted between 2013 and 2018. While the number of respondents who say that Muslims and African-Americans experience “a lot” of discrimination held steady over that time period, fewer people felt gays and lesbians experience significant bias as a result of their identities.

The plummet in polling numbers was particularly significant among two groups: millennials and men. Over just a five-year period, 16 percent fewer people between the ages of 18 and 29 believe gays and lesbians are routinely discriminated against.

The drop among men was 19 percentage points. That means for every five men, one of them decided between the years of 2013 and 2018 that people no longer experience differential treatment because of their sexual orientation.

Men were also the least likely group overall to believe that gay and lesbian people experience “a lot” of discrimination. A little less than half (44 percent) agreed with that statement.

PRRI did not poll Americans about bisexuals or transgender people.

There are two ways to read these findings. They could be a barometer of the larger trend toward acceptance of gay and lesbian people in the U.S. following the legalization of same-sex marriage. Opinion polling takes a substantial dip after 2015, the same year that the Supreme Court ruled in Obergefell v. Hodges.

That explanation correlates with Gallup’s surveys on the subject. In May 2018, Americans boasted record support for marriage equality—67 percent of people claimed all couples should have the right to wed.

And yet, the research from PRRI shows that the groups that are least likely to believe that gays and lesbians continue to experience “a lot” of obstacles in contemporary society are the least likely to be supportive of LGBTQ rights: people over the age of 65, white people, and (again) men.

These are the same demographics that largely fueled Donald Trump’s upset victory in the 2016 presidential election.

If groups that are already less likely to support the full equality of LGBTQ people are also the least likely to think gays and lesbians are being discriminated against, that could be a troubling harbinger in the wake of the alleged Jussie Smollett hate crime hoax. Conservatives—including the president’s son, Donald Trump, Jr.—have used the controversy to discredit other LGBTQ victims of violence.

However, all available data shows that bigotry is far from a thing of the past. Hate crimes against LGBTQ people rose three percent during the first year of Trump’s presidency, according to the Federal Bureau of Investigations (FBI).

LGBTQ people remain more likely than members of any other group to be harassed, threatened, or targeted with violence because of who they are.

But even as shifts in public opinion fail to recognize the daily realities faced by the LGBTQ community under the current administration, one group has continued to believe people still experience sexual orientation discrimination: African-Americans. The number of black respondents who feel gays and lesbians still experience bias only fell four points between 2013 and 2018, the smallest drop of any demographic of the U.S. population.