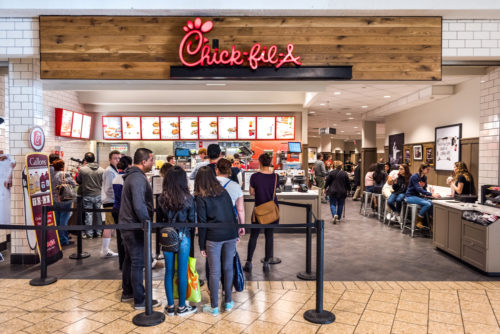 The San Antonio city council has voted against allowing Chick-fil-A to open a franchise in the local airport after it was revealed that the company has continued to pour millions of dollars into anti-LGBTQ groups.

“With this decision, the City Council reaffirmed the work our city has done to become a champion of equality and inclusion,” District 1 City Councilman Roberto Treviño said after the vote. “San Antonio is a city full of compassion, and we do not have room in our public facilities for a business with a legacy of anti-LGBTQ behavior.”

Treviño made the motion to deny the fast food chicken sandwich outlet the lucrative spot as an airport concession.

Paradies Lagardère, a company that operates restaurants and shops in airports, had applied to open several concessions in 10,000 sq ft of space in one of the airport’s terminals. The application was approved with the stipulation that Chick-fil-A not be included as an option.

“Everyone has a place here, and everyone should feel welcome when they walk through our airport,” Treviño said. “I look forward to the announcement of a suitable replacement by Paradies.”

“This is the first we’ve heard of this. It’s disappointing,” Chick-Fil-A said in a statement. “We would have liked to have had a dialogue with the city council before this decision was made. We agree with Councilmember Treviño that everyone is and should feel welcome at Chick-fil-A. We plan to reach out to the city council to gain a better understanding of this decision.”

Seven years ago, Chick-fil-A’s record of donating to anti-LGBTQ organizations came to light. The fast food chain had donated to the the SPLC-designated hate group Family Research Counsel and the conversion therapy group Exodus International.

CEO Dan Cathy told a newspaper that the company was “guilty as charged” of making anti-LGBTQ donations and said that marriage equality proponents “have the audacity to define what marriage is about” and were “inviting God’s judgment on our nation.”

Chick-fil-a has spent years trying to downplay these donations, saying that they “will treat every person equally, regardless of sexual orientation” and that the company’s charity arm “is now taking a much closer look at the organizations it considers helping, and in that process will remain true to its stated philosophy of not supporting organizations with political agendas.”

But that hasn’t stopped them from donating to anti-LGBTQ organizations.

The council vote was 6-4. The four votes against the measure were spurred by councilors who wanted more time to examine the contract.